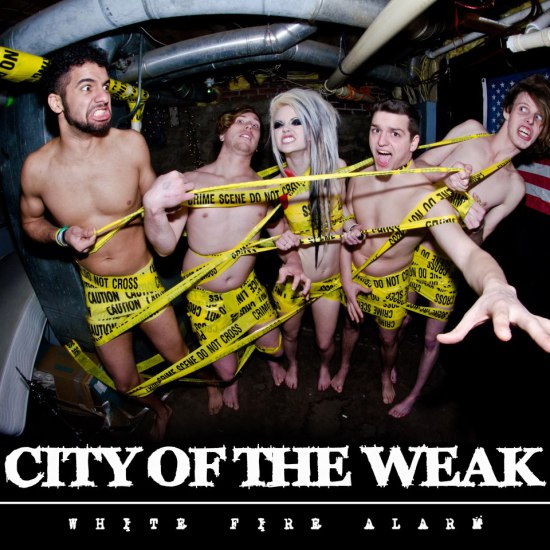 NOW AVAILABLE! FIND IT ON:

White Fire Alarm
vs. 1: Almost called you out, but walked away
You’ll find a problem with me no matter what I say
You claim you know me, but you really don’t
Can’t take it any more what are you starin’ for
Well I’d stare too, cuz you’re such a mess. I can’t help it that you’re all too obsessed
You better pick it up before you fade away cuz you’re just going down, not going out with a bang

Chorus: You only wanted a war but i’ve seen your side before whoa-
Your faith in nothing is still believing in something whoa-

vs. 2: I know what you’re about, I’m not impressed
This working life has captured your innocence
I’d wanna help you but I’ve practically bitten through my lip just trying to share the truth
You chose to love the lies so there’s nothing more I can do for you, or that I want to
You saw the light and then you turned and ran, so now your own blood is in your own hands

In a World of Bottles & Bedsores
vs. 1: Was I this much of a mess before or just seeing clearly?
I used to be someone that they adored, but i’ve been slipping quickly
Disappointed the best things in life aren’t as solid as they seem
We all get close but push farther away, I was fine ’til you had to

Chorus: Go, but I will never settle
This time we’ll be that much better
I won’t stop even if i come undone
No matter what we’re moving on

vs.2: Is feeling this better than feeling nothing?
Cuz I don’t wanna feel a thing anymore, I gave it the best that I had
Just for no one, no one to care about me
The bottle that I hold beside me agrees
I’m not fine I’ve traded in what I believe
All I ask is please don’t let them pull us below
You have to

Chorus: Know, that I will never settle
This time we’ll be that much better
I won’t stop even if i come undone
No matter what we’re moving

On, but I will never settle
This time we’ll be that much better
I won’t stop even if i come undone
No matter what we’re moving on, moving on

Chorus: No! I will never settle this time
We’ll be that much better
I won’t stop even if I come undone
No matter what we’re moving on (X2)

Better Than This
Verse 1: This could last until you come back, but I’ll let you pass
I’m not perfect and I’m living a lie, at least I can say I tried
You never even gave it a fight, you set us out of your sight

Chorus: I know you fear the worst, don’t you dare ignore me
All the vengeance I hold, will kill me slowly
And follow me down so I won’t be lonely
Cuz I promise that I’m so much better than this

verse 2: I’m so scared that no one will know me, will they think I’ve gone crazy?
It’s not my fault that everything’s changing, how messed up you’ve all been lately
They never even gave me a shot, they want me to give in but I will not

Bridge: What have you done to me?
I’ve become the enemy
This time I think I did it I drank my own poison
I pray that it’s not the end but I know you’re already gone

vs. 1: Holding onto what you feel, for the first time does it matter if it’s real?
Cuz the whole world sees you, running from your problems
You’re not a coward, you’ve just become numb

From wanting, fighting, and chasing the only thing we know
Thought this was over until I got this low
It’s desperation searching for inspiration

Chorus: Leaving finally but still i feel empty
I’m just starving to be right what you need
This is the last time I fell but you turn me on
Thought I was safe but something will always feel wrong

verse 2: Letting go so you can deal, but the truth is that way you will never heal
You only get one life, this isn’t a game
You can’t just keep playing, then throw all the blame

We’re gonna get this but not before we lose control
We’re standing on a ledge but soon we’re gonna fall
Why risk it all when we’re destined for failure?

vs. 3: Holding on to what’s not real, for the last time doesn’t matter what you feel
Cuz now the world is simply numbering your exit
You’re known as a coward, but that mean’s you’ve made it

We’re gonna get this but not before we lose control
We’re standing on a ledge but soon we’re gonna fall
Why risk it all when we’re destined for failure?

Bridge: This is what we do, they don’t even know
We’re gonna get this but not before we lose control

The Difference Between You And Me Is…

vs. 1: Call it condescending, this battle’s never ending
We’re not dealing with the enemy they’re in disguise you see
I swore I’d keep my defense, somehow I drew too close
To this life I’ll never have, this love i’ll never feel

Chorus: He’s laughing as you’re pulling their triggers
Cursing them for faith’s sake, you really have no place
You’re a wolf wearing sheep’s clothes so don’t tell me it’s not real
How ’bout this bullet in his head is it real now?

vs. 2: You’re so condescending, this battle’s never ending
You’re not dealing with the innocent, I’m gonna handle this since
I swore I’d keep my defense, somehow I drew too close
To this life I’ll never have, this love I’ll never feel

Where have all the children gone? Those fuckers don’t belong
All the twisted lies you prophesize, you’re in disguise we see
We can’t trust anything cuz honesty is limited
It’s killing us to look back but honestly you’ll never get this

I’ll put this bullet in your head is it real now?